What is OZONE and How does it Work?

Restoration companies like ours are often called upon to removed odors from pets or smoke that have been imbedded in the walls and carpets of a property. Most members of the public know that one method of accomplishing this is to use OZONE, but few understand what OZONE is and how it works.

You may have heard of the OZONE layer, a layer of gas that is high above the Earth’s surface that protects life on the surface from harmful rays from space, but did you realize that the layer of gas in the sky, and the man-made OZONE we use in your home are the same thing? 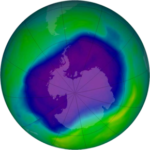 Naturally occurring OZONE is formed in two ways. One is through short-wave solar ultraviolet radiation and the other is by passing an electrical charge through oxygen molecules. As you likely know, a single oxygen molecule is notated O2, indicating it has 2 oxygen atoms. This is the most stable configuration for oxygen atoms to find themselves in. An OZONE molecule is notated O3 because, you guessed it, it has 3 oxygen molecules. The reason this sometimes occurs is when an electrical charge, perhaps lightening, passes through the oxygen molecules, they all break apart, and when they come back together, they will come back together in three’s. This coming back together in three’s is OZONE.

Ever wonder why after a lightening storm, the air smells clean and fresh? Well lightening passed through the oxygen in the air creating OZONE. Now OZONE, in its configuration of 3 oxygen atoms instead of two is very unstable, uncomfortable even. As it floats along in the air, if it comes in contact with a contaminant molecule, one of the atoms quickly leaves the other two and attaches itself to the contaminant in an attempt to be more stable. Instead of stability however, this action causes a mini explosion that essentially destroys both the contaminant and the oxygen atom itself by turning them into carbon dioxide and hydrogen. So this small microscopic process eliminates the extra oxygen atom, the contaminant along with any odor or microbiology that came with it, and it leaves a stable oxygen molecule left over. This process is called oxidation.

Oxidation is so reactive that it works with all sorts of contaminants. Here is a partial list of the thousands of things OZONE is effective against:

That is the basics of how OZONE works. There are many man-made apparatus that mimic this naturally occurring process that can be used to handle the above mentioned issues and many others. In a later installment we will discuss the most popular man-made methods for OZONE and explore the pros and cons of each and explain why we only use the best methods for helping our clients tackle odors and mold.