Are Radon & Radium the Same Thing?

Not exactly. For starters, radon is a gas and radium is a solid. Radium is produced by the natural decay of uranium, a radioactive element found in nature in low quantities. This uranium-238, to be precise, produces radium-226. Then, during the decay process, alpha particles start to be emitted, turning the radium into radon-222. These particles attach themselves to particle of air and exist as a gas.

This occurs naturally all over the world and at low levels is negligible to human life, but if concentrated, radon can cause major health issues. This is because when a person breathes in these particles they embed themselves in the lungs and stay there. Over time they continue to decay and this radioactive decay process causes real problems in the human body, most notably lung cancer.

Everyone knows that the molecules of our bodies are made up of atoms, and that those atom, depending on which element they represent have a certain number of protons and neutrons at their core, and electrons orbiting them. Well these alpha particles that “radiate” out of the decaying radon with so much energy that they can literally strip electrons away from the atoms that make up your body. It’s unnoticeable at first, but imagine take a brick wall, and then drilling individual holes through it with a drill, one by one. You’d notice nothing after the first hole, and nothing after the second, but over time, if you kept drilling holes, eventually the wall would be in serious trouble. 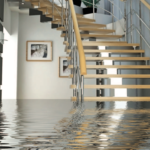